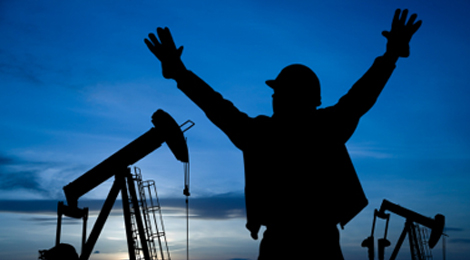 Talk about slipping through the window just as it slides shut.

At the beginning of May master limited partnership Hi-Crush Partners (HCLP) closed a $43.8 million public offering for 6 million units.

And I have to wonder if, after today’s deeply disappointing jobs report for May took some of the luster off oil prices, Hi-Crush would have been able to do this deal if if it had been delayed until the end of June.

Hi-Crush’s offering rode a big rally in oil from an April 4 low for West Texas Intermediate at $35.70 a barrel to $49.33 on May 27–that’s a 38.2% increase–that had some traders willing to massively over-interpret a small increase in the number of oil and natural gas rigs working in the United States into the beginning of a recovery for capital spending that U.S. shale fields. On Friday, June 3, Baker Hughes reported an increase of 9 oil rigs working in the prior week. Along with a decline of five natural gas rigs that brought the U.S. rig count to 408 rigs, the first gain in the Baker Hughes’ rig count since the week of August 21, 2015. (The rig count is still some 80% below the peak.)

The 20% jump in the price of Hi-Crush units, the stutter in the oil rally, and the probably-just-noise data on U.S. rig counts–and the news that Hi-Crush has raised $44 million–sets up decision time for anyone who holds Hi-Crush units. (And I do in my Dividend Income portfolio.) Even with today’s big jump in the unit price at $10.75, these units are still 77.8% below the $48.47 where I bought them before the crash in the U.S. energy sector. Even with the $44 million raised recently Hi-Crush isn’t exactly on the brink of restoring its very hefty pre-energy-crash dividend. If you’re going to hold here, you’d better be doing it because you think the master limited partnership has a good chance to go to $15, say, in the near term rather than because of a vague but understandable desire to see the stock back where it was.

Here’s my take on where Hi-Crush stands now.

Raising $44 million gives Hi-Crush enough of a cash buffer to remove worries about the company surviving until a turn in the fracking sector. Hi-Crush reported a truly dreadful first quarter that made survival a real question in the minds of many investors. The company reported an $11 million negative adjusted EBITDA for the quarter with a big part of the loss due to a big increase ($8.2 million) in uncollectible receivables after one of its customers went into bankruptcy. (Excluding bad debt the EBITDA loss was $2.9 million.) That pushed the company into negotiating an amendment to its revolving credit facility that waived the covenants for quarterly EBITDA. (That’s Earnings Before Interest Payments, Taxes, Depreciation, and Amortization.) A standard reaction to that kind of news is “Great that creditors were willing to be so flexible, but for how long?” That question seemed particularly relevant in light of other elements of Hi-Crush’s quarterly results. The drop in revenue was brutal as it fell to $52.1 million from $102.1 million in the first quarter of 2015.

But an expanded cash buffer doesn’t guarantee a quick or easy trip to the turn in the sector. Most of the relatively few analysts that cover the company or the fracking sector are calling for further declines in demand/prices for fracking sand in 2016 with stabilization in 2017 and then a recovery in 2018. With the extra capital that it has raised, cuts to capital spending and a focus in producing from its very lowest cost mines, Hi-Crush will, in my opinion, get to the turn. But that’s a long time for investors to wait.

And it may seem even longer. The suspension of the dividend in order to save cash will hang over the unit price until it is restored. And many of the steps forward for Hi-Crush and other companies in the sector will be followed by steps backward. For example, it’s great that Hi-Crush had a big gain at the end of this week on higher oil prices and hopes for a pickup in the number of working drilling rigs in North America but it’d hard for me to imagine that this is the beginning of a smooth march upward for the U.S. energy sector. We’re more likely to see higher oil prices leading to a resumption of production at now suspended wells that are part of the fracklog. Which will lead to another pull back in oil prices.

My sense of Hi-Crush and other fracking sand companies such as U.S. Silica (SLCA) are that they are likely to be very interesting trading stocks over the next stage of the U.S. energy sector recovery. I think traders and investors will have repeated chances to sell high and buy low–and repeat over the next 112 to 18 months as enthusiasm for a recovery in tracking ebbs and flows.

My opinion is that the big recent move upward in units of Hi-Crush is exactly such an opportunity. I will be selling these units out of my Dividend Income portfolio on Monday. And then keeping my eyes open for a chance to re-enter the sector at a low price and exit at a temporarily higher level during the long road to recovery.

I hope that I’ve given you enough facts so that you can reach your own decision on what to do with Hi-Crush,