How sticky will inflation prove to be in 2023? Lessons from Christmas shopping say, Stickier than the market now expects (and the Fed hopes) 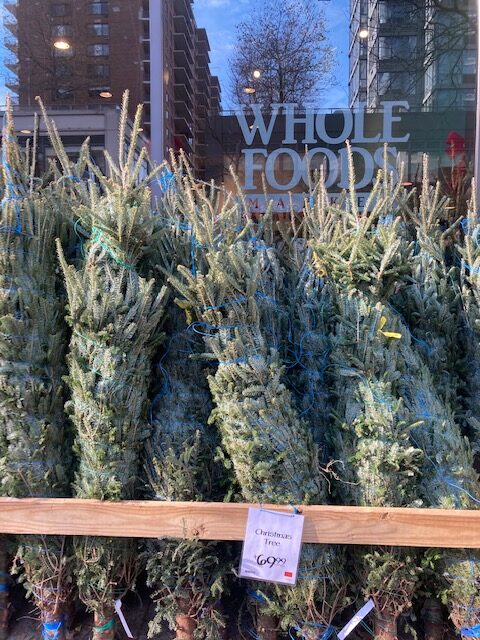 The big investing and economic question for 2023 is How hard will it be to push inflation down to something near the Federal Reserve’s 2% target?

The answer will determine (at least until rising unemployment gets the Fed to blink in the second half of 2023) how far and how fast the Federal Reserve will have to raise interest rates, how big a danger a true recession is, and how much of a slowdown we’ll see in economic growth and corporate profits?

And the answers to those questions will largely determine the direction of the stock market in 2023.

I’d like to offer two of my own observations from my personal Christmas shopping season free of charge to those economists who are now grappling with these questions.

My personal experience says that inflation will be stickier than the consensus on Wall Street now believes. And that it will be very, very hard to push inflation back to the Fed’s target range without a true recession.

Here are my two observations. (Please add your own experiences in the comments section to this post;)

1. Christma tree prices were insane this year, and that did cut into demand. But because suppliers also reduced shipments before the season began, I didn’t see rampant price cuts. Which argues that Christmas tree vendors saw this as a one-season problem and were reluctant to lower prices because of the effect of those cuts on next year’s prices. About two weeks or so before Christmas I started to price trees. Whole Foods was selling trees for $79 each, about $10 a tree higher than last year (without delivery, of course.) That’s 14.5% annual inflation, by the way. The French Canadians on Broadway, the wealthier half of my neighborhood in Manhattan, quoted me $40 a foot or $280 for our usual 7-feet tree. (They deliver and were getting new shipments of trees every couple of days, unlike Whole Foods where it was one delivery of trees and done. So you wind up buying an “aged” tree.) I remember trees from this vendor selling for $30 a foot last year. That’s 33% inflation. I walked over to my usual tree stand outside a bodega on Columbus Avenue in the less-wealthy half of my neighborhood. There a 7-foot tree was priced at $120. I remember $100 last year for 20% year-to-year inflation. (Jose doesn’t deliver either and he wasn’t planning on getting another delivery before Christmas. A delivery for him is s lot of cash at risk–especially if he doesn’t sell out.) We decided to play Christmas tree roulette by putting off our purchase and hoping the tree would be fresher if it stood outside at the tree seller’s stand than in our apartment. That didn’t work out very well. By the time we decided we had to buy–we have a family tradition of my wife and kids yelling “When are we getting the tree?” and not decorating it until a day or two before Christmas–Whole Foods was completely out of trees and Jose had sold his last 7-footer. We were left with s choice between the $300 Broadway seven-foot tree or $55 for a 5-foot Columbus Avenue tree. It looked like the vendors on Broadway were going to get stuck with a lot of trees this year so I tried to bargain only to be told by the woman actually selling the trees that her boss had said No discounts. Rather than cut prices, he was willing to mulch his unsold trees. In some other years, I might have dug down and spent the $300, but that seemed like a bad idea this year with the economy uncertain. The 5-foot tree looks very nice in our house and it was sure faster to decorate. The day before Christmas I saw one of the French Canadian vendors on Broadway loading unsold and still-wrapped trees onto a truck for a trip, I assume, to the dump or the compost site. In this one market and on my very small sample I’d say that prices are likely to be stickier than expected because sellers don’t want to reset future price expectations.

2. Champagne–how many people will pay these prices when it’s not Christmas or New Year? I love champagne–when the revolution comes and the commander of the firing squad asks “Any last wishes?” I’ll ask for a glass of champagne. Many years ago I moved on from the prestige houses like Moet to more interesting–to me–vintage champagnes and then that led me to explore champagne-like bubblies from the Jura and Alsace. And a couple of years back to a producer in New Mexico called Gruet. This year, though, we’d been invited to a “fancy” New Year’s Eve party and I thought we’d bring a name champagne. I almost went into sticker shock in the wine store when the owner told me that a bottle of Veuve Clicquot would set me back $75. For the occasion, I coughed up the dough but as I checked out the owner and I took a trip down memory lane playing who could remember when Veuve Clicquot sold for $40. (She beat me with a claim that she could remember $29.) As a was packing up my wine, I thought I would tell her of my find, Gruet “champagne-like” wine from New Mexico. But she said, Oh, we sell that now. Maybe for the last 18 months. Gruet, which is what we drank at Christmas dinner, sells for $22. My points for this inflation story are 1) that the Christmas splurge effect is likely to have postponed some of the consequences of inflation until after New Year’s. There are a lot of purchases that get justified with “Ah, it’s Christmas.” Come January when consumers don’t have that excuse and when they’re facing big credit card charges for the Christmas season, I think we’re likely to see a big surge in consumer restraint, and 2) how many consumers will return to the Veuve Clicquot of a market once they’ve been exposed to the Gruet. Looking forward, I think that continued high inflation and the prospects for a further slowdown in the economy will open up a lot of opportunities in the market for quality products at lower price points. For example, for folks who want to buy an electric car, will this environment make going with an electric GM car rather than a much pricier Tesla seem like a more attractive choice? If I were a company with that high-priced product in this environment, I’d be spending a lot of time pondering this question. Inflation statistics are supposed to capture this kind of shift in what goes into the average consumer’s shopping cart. But that capture takes a while. And that lag is likely to show inflation running hotter than it actually is for a while. The Federal Reserve has to manage inflation as it is. Not as it might be when the statistics catch up down the road.